There’s something brave playing with traditional ethnic dishes. Only a few chefs seem to pull it off successfully. Executive Chef Thomas Ortega, raised in Cerritos, Calif., takes a brazened approach to his restaurant style and menu and guess what? He nails it at his new restaurant in his hometown called Amor y Tacos. 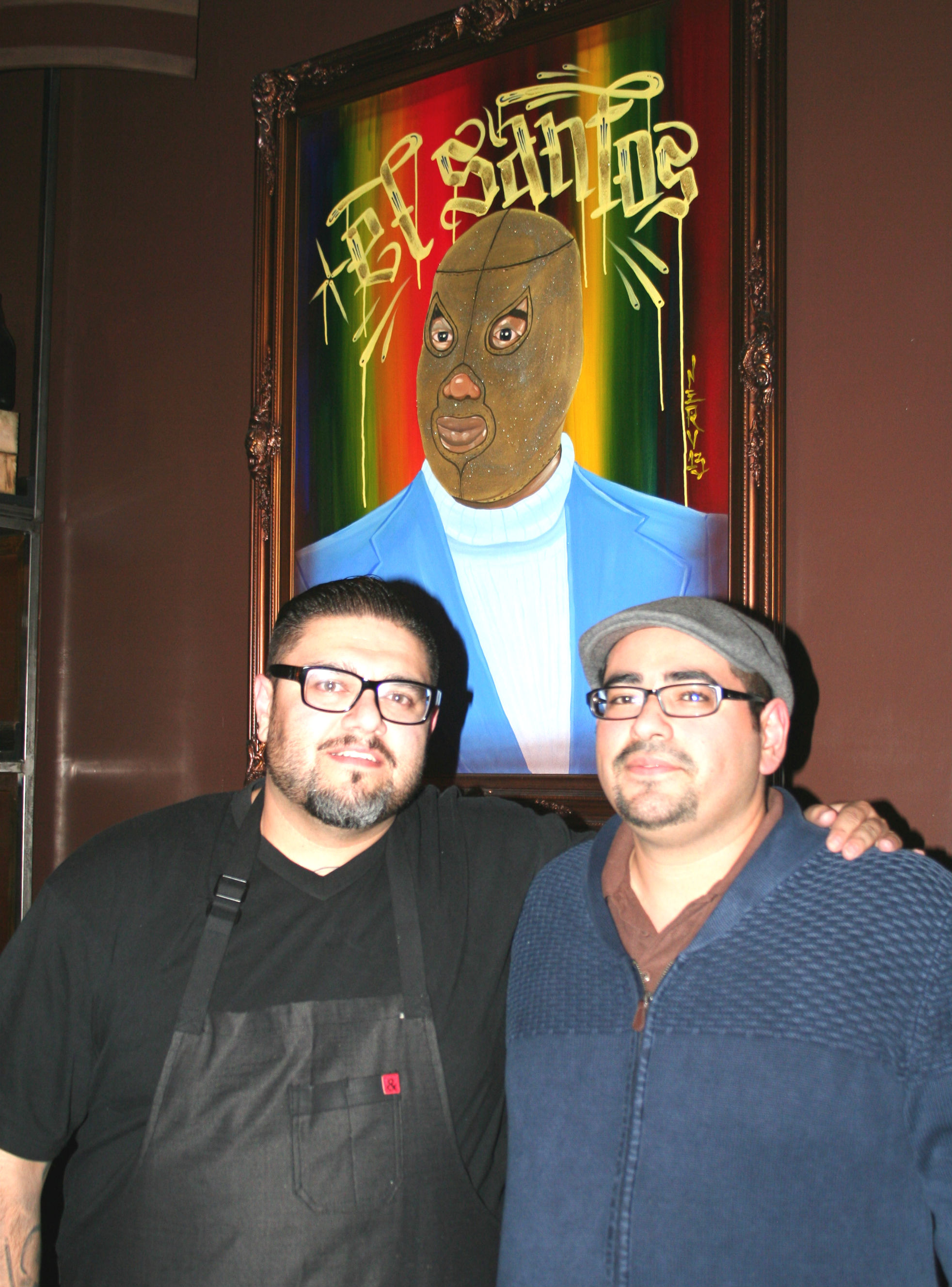 Good-natured and a mere 35-years-old, Chef and Owner Thomas Ortega brings his culinary skills back to his hometown mostly known for its auto parks with a gourmet twist on Mexican culinary staples and comfort food favorites. “Tommy” as his close friends call him graduated from Cerritos High School and then California School of Culinary Arts in Pasadena, CA. He appeared and endured on the television series “Hell’s Kitchen”, hosted by celebrity chef Gordon Ramsay, in 2009. Today he is mostly known for his first restaurant in Redondo Beach, Ortega 120, a contemporary Mexican restaurant that combines the charm of old-world Mexico with a modern SoCal flair.

LatinoFoodie recently visited his restaurant that showcases vibrant colors and artwork and has candles of saints on every table. It’s quite the transformation from the old Chinese restaurant that used to be there.

We kicked the night off with cocktails (of course!). I ordered the Puro Sangre cocktail that tastes like a tamarindo candy you’d buy at a corner Latino market — sweet and spicy with chile powder. It has chamoy, Monte Albon mescal, fresh limeade, muddled orange and chili powder. It also has a spicy tamarind straw that I chewed on throughout the night. St. Jude blessed the drink for me as you can see below. 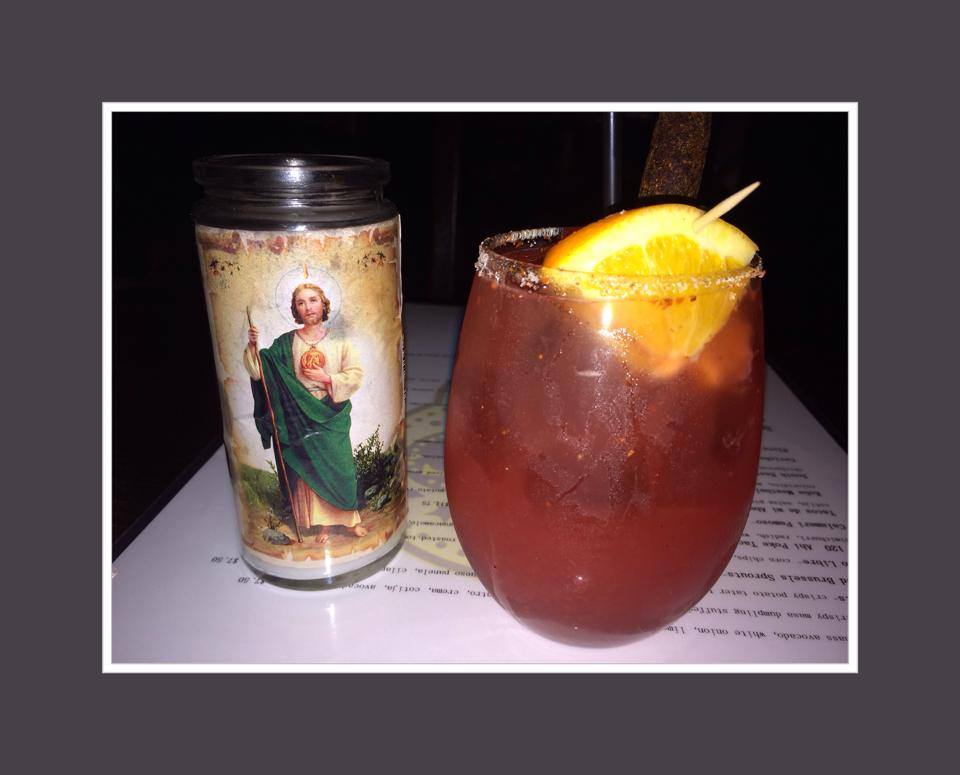 Of course, there are tacos. Delicious tacos. From tinga de pollo to rajas con queso, Chef Ortega knows how to paint masterpieces on the canvas that is a corn tortilla. The King Dragon Taco has hoisin caramelized roasted duck, cucumber, toasted sesame seeds, cilantro, kimchi, radish, scallion tortilla all for $13. 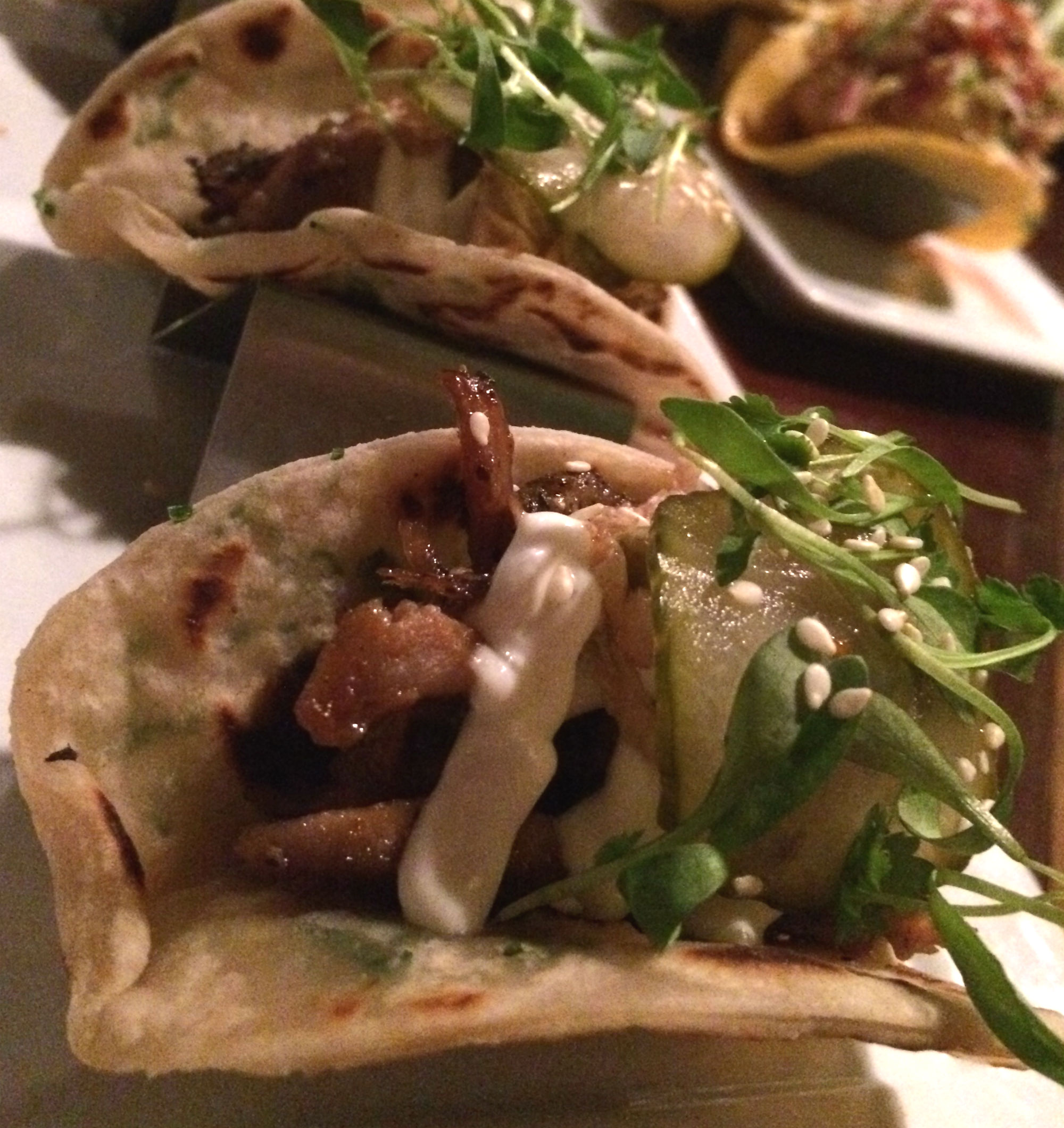 And his love affair for tacos continue — 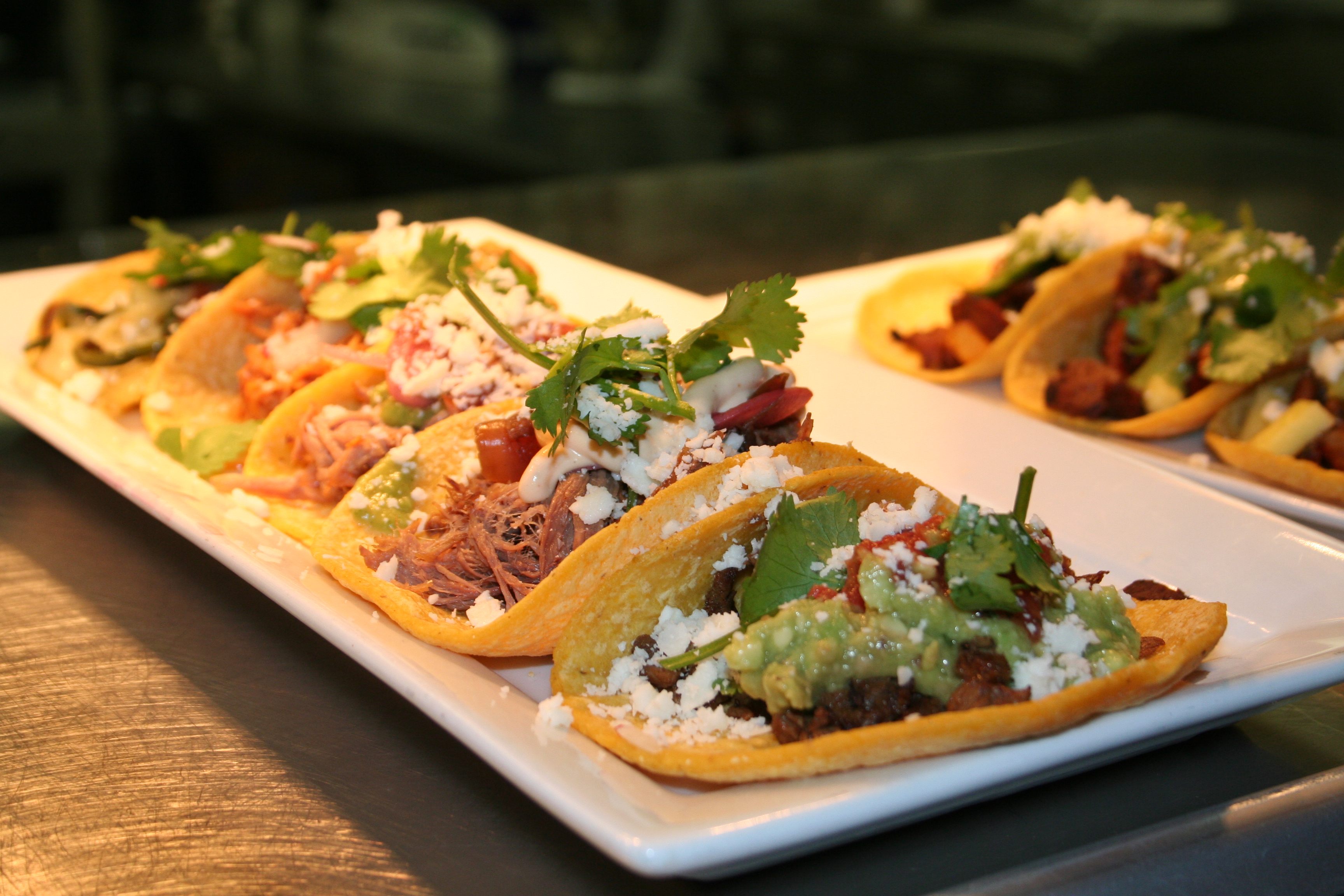 In some circles, the Dodger Dog is sacred. But to Chef Ortega it was begging to be re-interpreted. The South East Dog by far was my favorite! A Doyer dog, short rib chile colorado, mustard, mayo, shaved red onion, cilantro, queso fresco, crispy chicharron in a brioche hot dog bun. Now, if Dodger Stadium served these puppies I’d consider buying season tickets. 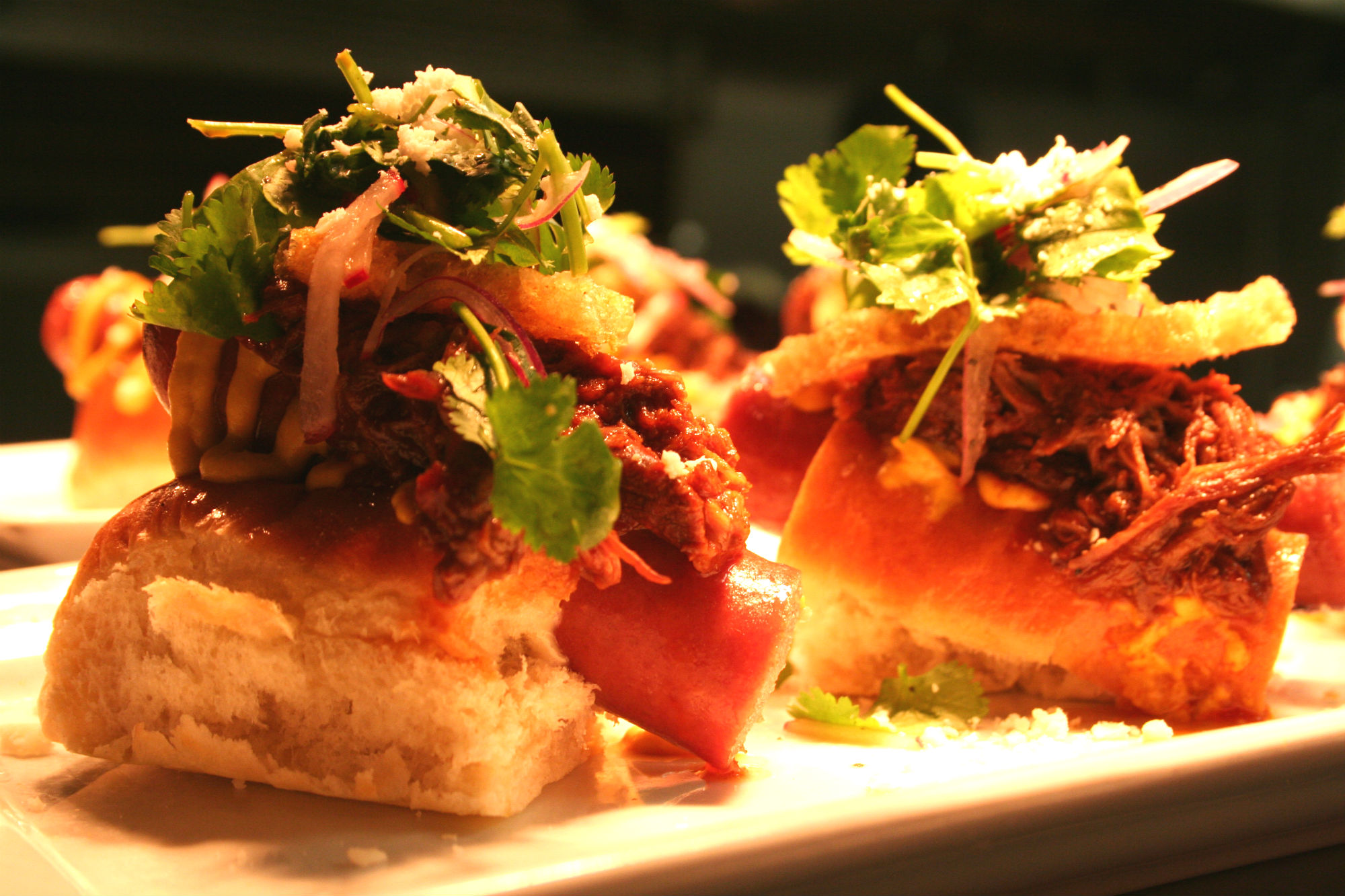 Elote — You could’ve sworn a street cart vendor himself down the block slathered the mayonnaise, cheese and chile powder on the corn — so sweet savory. 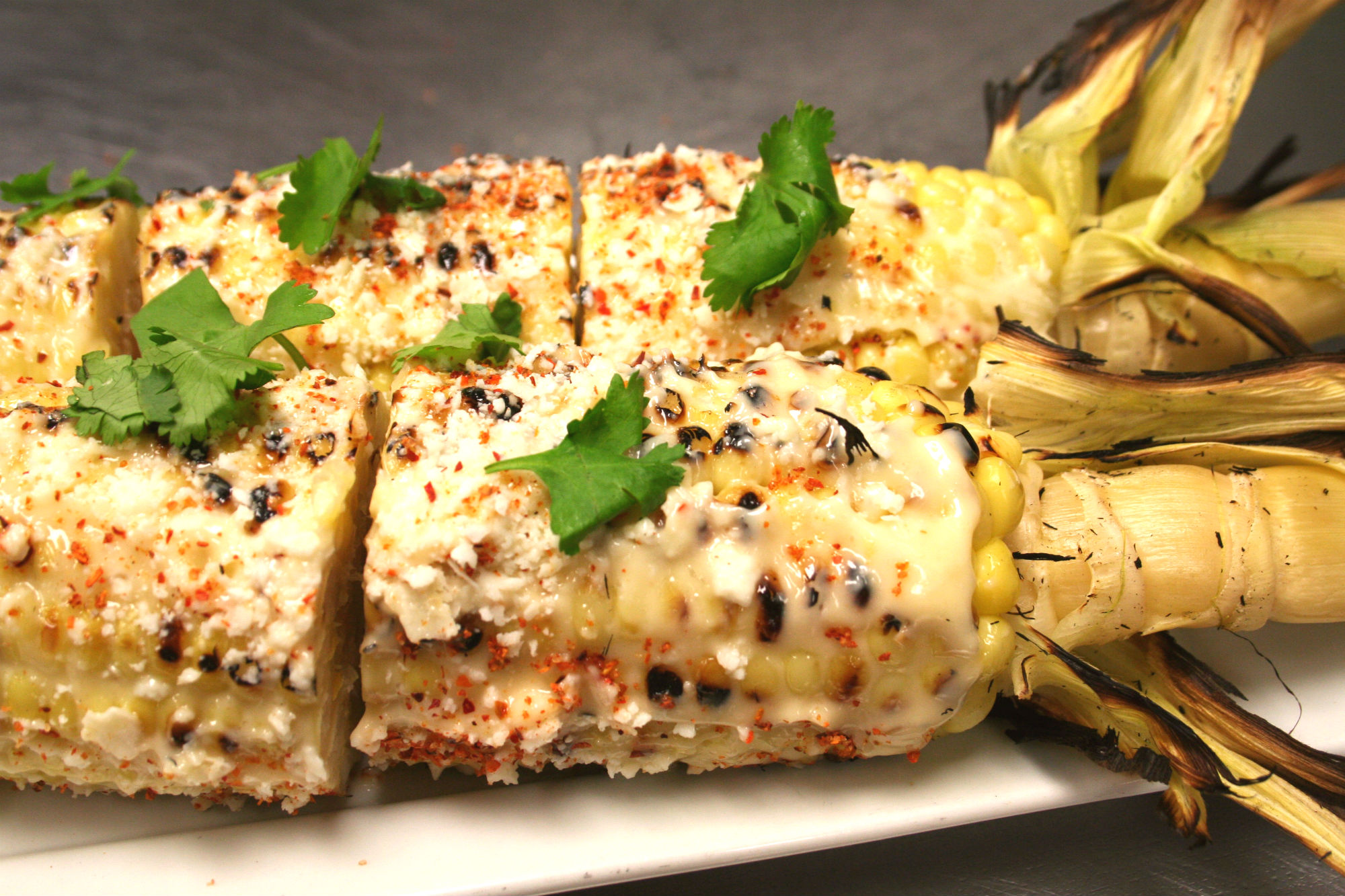 Chef Thomas not only plays with traditional Mexican dishes, but he throws a Mexican twist on American favorites like tater tots. It was dark inside the restaurant so we didn’t get the best photos but trust me, these tots had BIG flavor with a 21-ingredient mole he learned from his abuelita, crema and cotija cheese. I think I’ll be serving these up for Super Bowl Sunday. 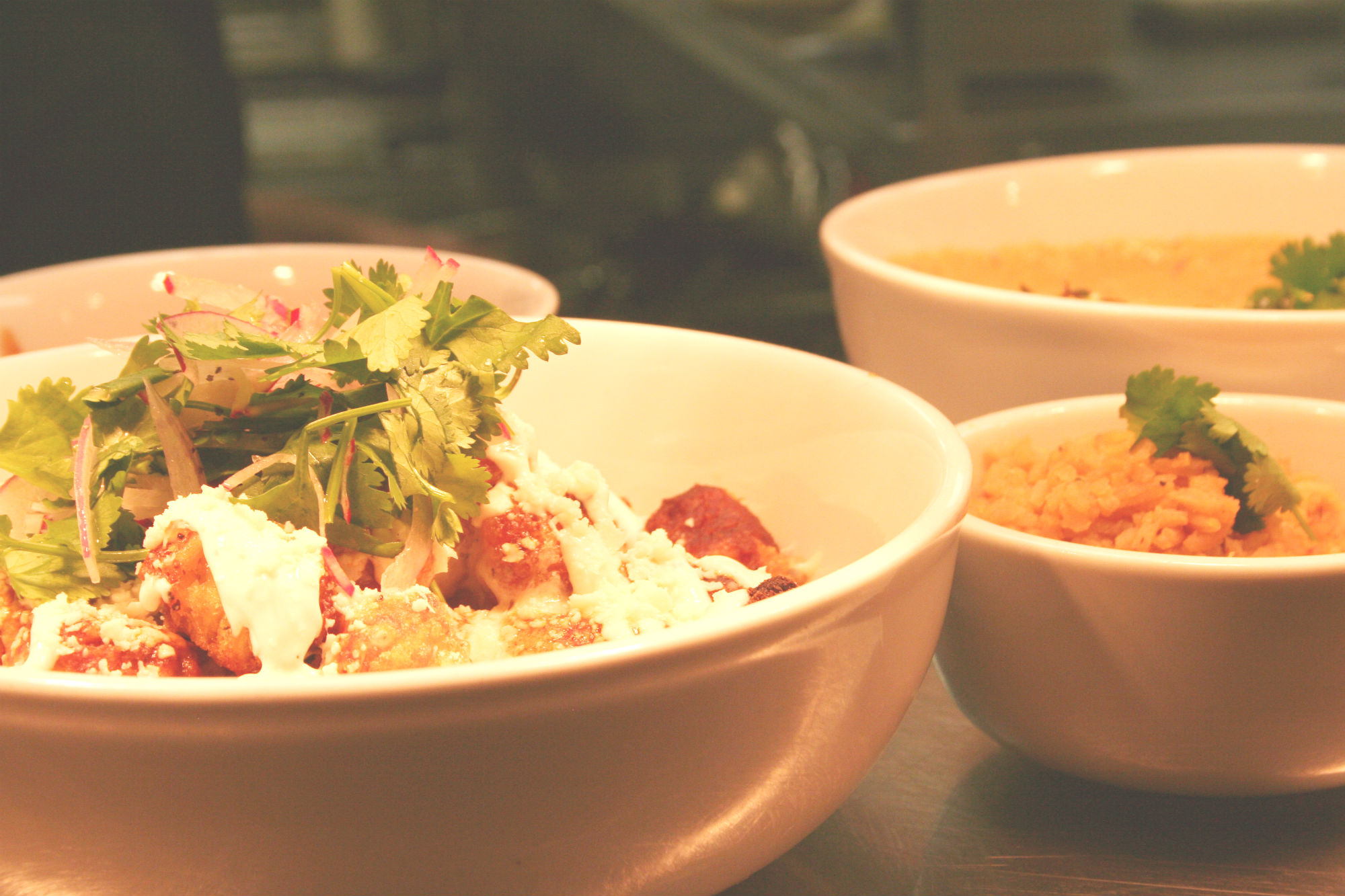 Although we could no longer hold our pansas in and had to actually undo the top button of our pants (no one was looking), we honkered down to enjoy two signature desserts. He has this amazing chocolate mole ice cream sandwich and another dessert of fried churros with an out-of-this world salted cajeta dipping sauce. 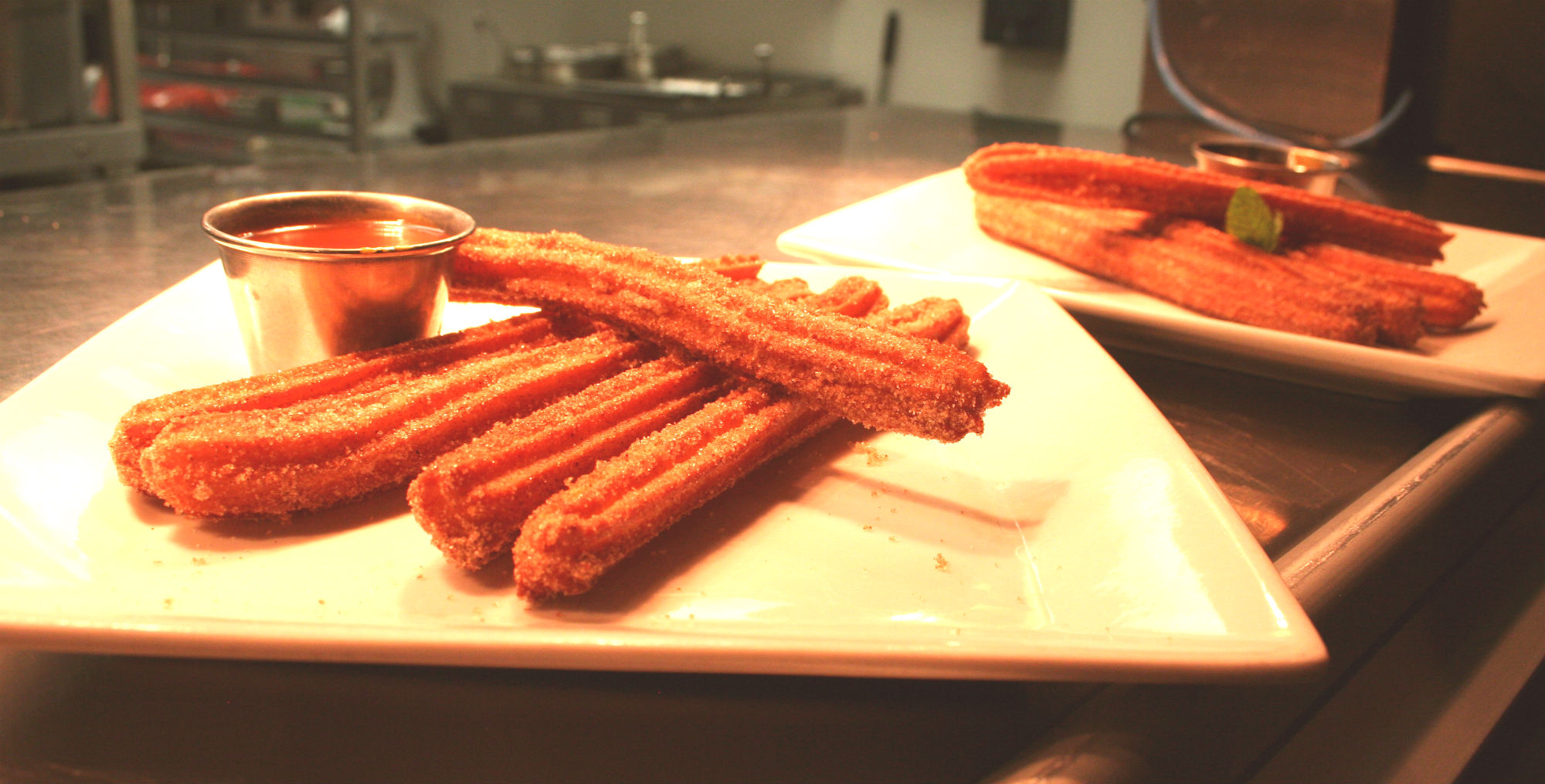 Here’s that mole ice cream sandwich mentioned above. The chocolate chip cookie has just a hint of mole flavor. I was hoping for a bit more mole flavor, but at this point, I was grateful to not explode. 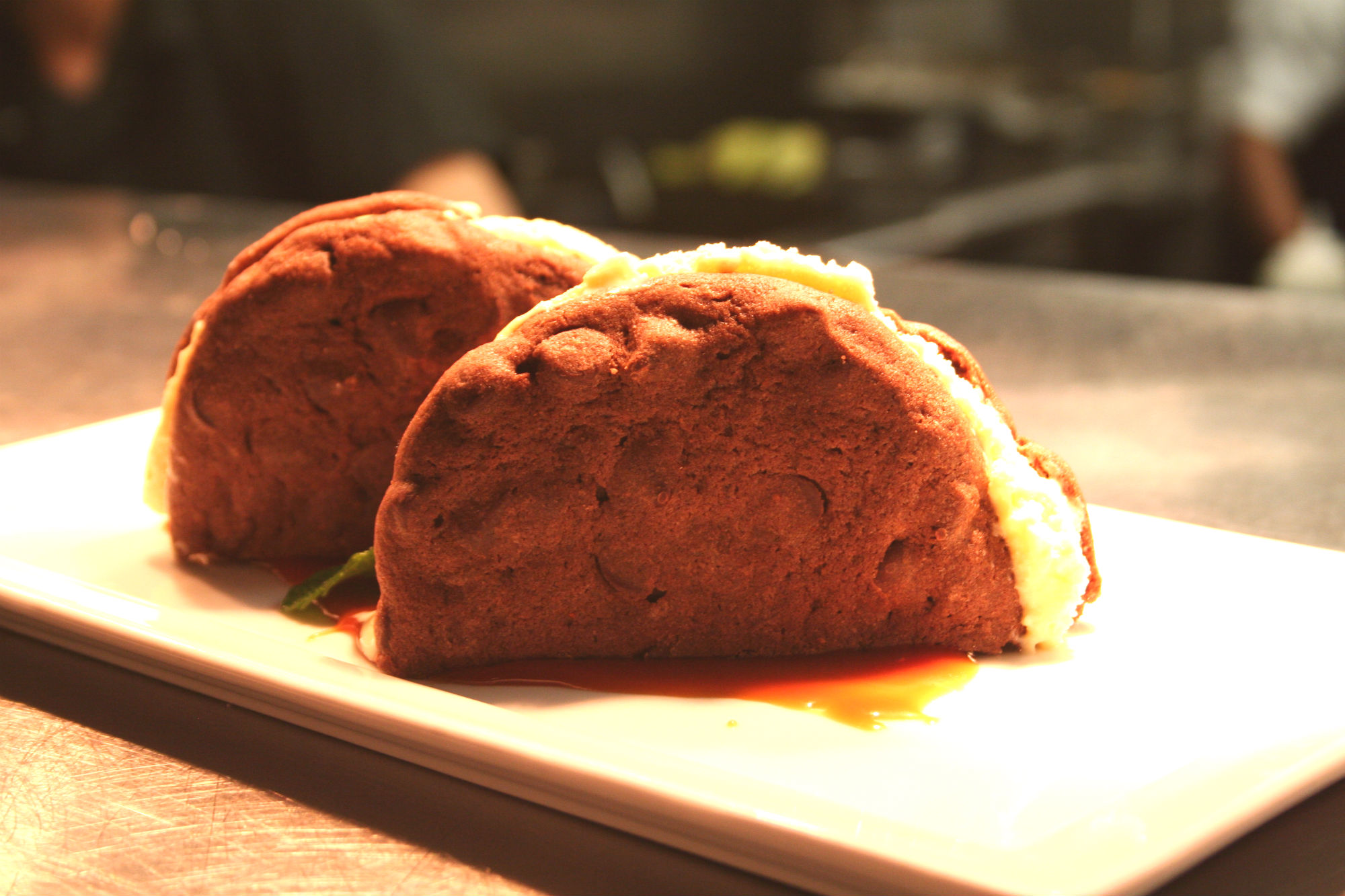 Thank you Chef Ortega for a delicious night! We’ll definitely be stopping by again when we’re back down your way and lose a few of these pounds we gained. It’s all good!