Seven years ago, Juan Mondragón, owner of Juan’s Restaurante in Baldwin Park, said his sister Sandy Mondragón was diagnosed with stage four stomach cancer.  Her family insisted on a diet of nopales (cactus paddles).  Convinced of the health benefits and the power of the nopal, her parents fed his sister nopales everyday for a month.  Unfortunately for Sandy, her parents didn’t know many ways to prepare it, which meant a lot of ensaladas de nopal for her.  After a month his sister refused to eat any more cactus paddle salads. 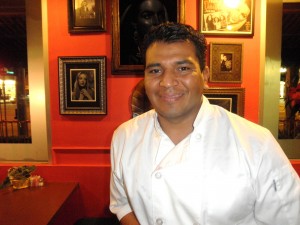 Juan had been working in a kitchen since the age of 15, well on his way to chefhood, and he knew he could create healthy and delicious recipes made with nopales. The variety of dishes, from tortillas, soups, tamales, moles, enchiladas, kept his sister filled with the benefits of the cactus. Now, whether you choose to believe that the cactus paddle had anything to do with it, the fact remains that the Mondragón family believes it does and Sandy is now in full remission.

About a year ago, Chef Juan opened his restaurant in Baldwin Park, aptly named Juan’s Restaurante.  It is a Mexican restaurant unlike others in the area and Juan has designed a menu around Pre-Hispanic Cuisine.  In a nutshell, this is the way Mexicans cooked before Europe set its sights on the riches of the land and the culture.  Real traditional cooking. This Pre-Hispanic Cuisine features dishes using traditional ingredients like: nopales, beets, chia, and pumpkins, with nopales playing the starring role. And yes, it predates burritos. Chef Juan has become the caterer to the stars, hob-knobbing with Ryan Seacrest, Joan Rivers, Martha Stewart, and Sofía Vergara. 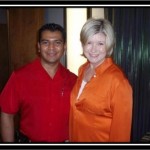 Chef Juan with one of his idols Martha Stewart.

The stars and others crave Chef Juan’s inspiring dishes filled with the richness of nopales. Nopales contain protein, are low carb, rich in fiber, rich in vitamins (A,C,K, to name a few) and minerals like potassium, magnesium, manganese, iron, and copper.  Studies suggest that nopales can also reduce blood sugar, cholesterol levels, and help in the treatment of certain types of diabetes.

Chef Juan believes in nopales so much that last year he planned and executed the first Feria de los Nopales in the parking lot of his restaurant. Now in its 2nd year, the event that educates the community about the health benefits of eating nopales attracts more than 10,000 people with Aztec dancers, musical entertainment, and a celebrity or two.

Chef Juan invited our LatinoFoodie appetites recently to taste his pre-Hispanic cuisine. Juan greeted us in his chef whites while we were taking in the vibrant décor of his restaurant; dazzling blue, vivacious orange, and pulsating pinks are the perfect backdrop for the traditional Dia de los Muertos artwork and for the feast that was laid before us.

We took our seats underneath the Rincon de las Solteras and were plied with tall glasses of Juan’s uniqe agua frescas. Although there are several flavors Chef Juan has created, we strongly recommend the Chía Limonada Fresca. You might remember chía from those late night infomercials: chachacha chía pets. Believe it or not, those little seeds have a unique mouth feel because they have a little gelatinous sack around the seed.  It was the best sweet and tart lemonade I’ve ever had.  The Pumpkin Seed Horchata was milky sweet and laced with cinnamon, and garnished with pepitas and light tuna (prickly pear, not the fish) syrup.  It left me with the sensation that I had just drank some of the most delicious cereal milk. The restaurant usually lets you sample the agua frescas so you can decide your favorite, including flavors of pineapple and nopal. 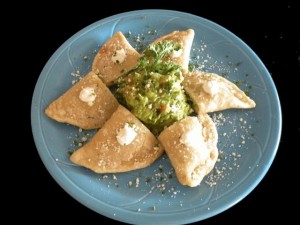 We started our meal with two kinds of empanadas: startling green masa pouches of cuitlachoche (corn fungus) and flor de calabaza (squash blossoms).  The cuitlacoche (or Huitlacoche) Empanada was oozing with cheese and the tasty brown corn fungus.  The serrano chiles and the spicy guacamole provided the perfect heat. The Flor de Calabaza Empanadas were stuffed to bursting with the delicate blossoms, epazote (herbs), a hint of jalapeño, and was dripping with cheese.  The bright green color was a tasty reminder that I was eating a masa made from nopales. 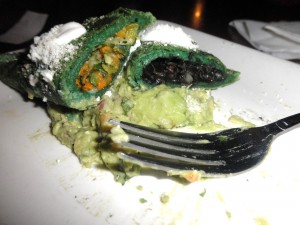 Chef Juan served us an assortment of delicious dishes, but we’re going to highlight some of our favorites. You’ll definitely want to go back time and time again to sample other dishes. Each of them was layered with flavor.

The Queso Fundido con Nopales had melted Monterey Jack cheese, lightly sautéed onions and mushroom, strips of nopales, with a chipotle sauce. The shared appetizer came with deliciously thick, green tortillas made from, you guessed it, masa de nopales.  The tortillas are made on site from scratch. 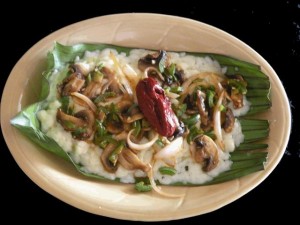 Our soup course was the storied Caldo de Piedra.  The soup has its origins in the Chinatla region of Oaxaca.  The soup of fish, shrimp, scallops, carrots and potatoes are heated when red hot rocks are placed in the cooking pot.  Follow this link if you’d like more information on the history of caldo de piedra.  The broth is made and garnished with Habaneros so don’t eat the garnish unless you want to burn a hole in your throat. 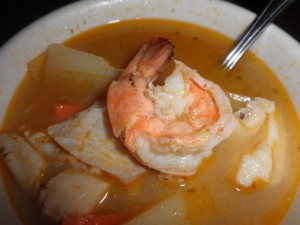 Such a delicious broth, but be careful not to eat a whole habanero chile!

Luckily for the LatinoFoodie who ate the Habanero (we won’t mention his name, but I think you know who he is), we also had Juan’s Mexican Sangria.  The mixture of dried and fresh fruit, seeds, nuts, and pineapple was perfect as a cooling libation meant to quench any thirst, including those habanero-induced thirsts from the soup.

We tried several of the moles that Juan’s Restaurante makes from scratch each day, with each mole taking about five to six hours to make.  Eleven moles may be overwhelming but take a deep breath and ask for a sample. One of my favorite moles is the mole de tamarindo as it is slightly sour and reminds me of my childhood.  It’s perfectly paired with a grilled salmon fillet.  Other moles of note are: Pipian Rojo, Pipian Verde, Pistachio, and Mole de Nopal.  We were treated to a big ol’ plate of Mole de los Dioses (Mole of the gods) which had filet mignon, julienned vegetables and nopales, green mashed potatoes creamed with nopales, all topped with Juan’s unique cuitlacoche mole, served with a side of tortillas de nopales.   The “Mexican truffle” — corn smut, cuitlacoche, huitlacoche — whatever you want to call it — the earthy, savory, and musty complex flavors of this fungus are simply divine.  Mole of the gods indeed!

One of our favorites of the night, Mole Tamarindo.

Although Juan’s has an assortment of scrumptious desserts, including one with plátanos and tequila, we couldn’t get over his brilliant creation of Flan de Nopal.  This flan is made with egg whites, Stevia, cactus, and a hint of cinnamon.  It is then topped with a light prickly pear sauce. 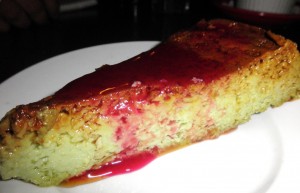 Breakfast plates are as low as $4 a plate Monday through Friday, and weekends you can experience all Juan’s has to offer at the $12 Brunch Buffet.

Juan’s Restaurante will be hosting a Posada and Toy Drive to benefit Padres Contra el Cancer at the restaurant Sunday, Dec. 18, from 3-8 p.m.  The toy drive will include activities for children, live music, Santa Claus and gifts!  Juan Restaurante is accepting toys prior to the Posada. LatinoFoodie walked away being impressed with Chef Juan Mondragon, his food, and his commitment to the health and education of the Latino community.