Some people like them crunchy, others like them tender and moist. Like many things in life, I want the best of both worlds when it comes to homemade carnitas. I want the chunks of pork to be fork-tender, moist and flavorful, but there’s something about the end process of roasting the carnitas that transforms the pieces into crispy, caramelized bits of Mexican heaven. Now why can’t other things in my life turn out this way?

DID YOU KNOW?
History shows that pork was introduced in Mexico by the Spanish, and one of the most characteristic Mexican dishes is called carnitas or “little meats” originating from the state of Michoacán on the Western side of the country. 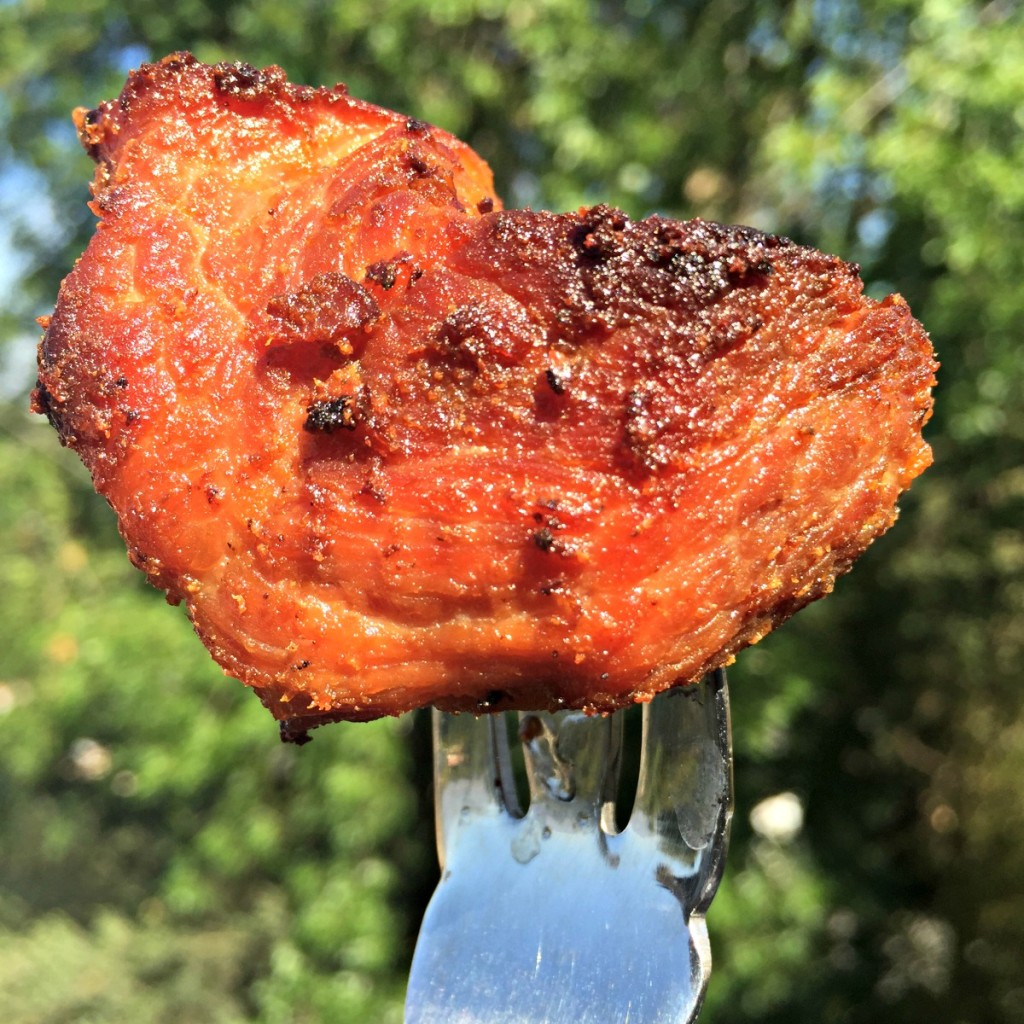 In parts of Mexico and the U.S., cooks make carnitas with the entire pig (liver, kidneys, and other underutilized parts of the animal) saying it has better flavor. Those familiar with that style will ask waiters at restaurants for “surtido.” We don’t live on a farm here in Alhambra, Calif., nor do we have the money to go out and buy a whole pig. So, in this household, we opt to work with the pork shoulder or pork butt. In this recipe below, I stuck with the nalgas (butt roast). It has enough fat to flavor the meat wonderfully.

CARNITAS PREPARED DIFFERENTLY DEPENDING ON REGION
After much research, I learned like many dishes in Mexico, carnitas is prepared and seasoned differently, depending on the family and region. I love the simple three ingredient carnitas recipe consisting of pork, salt and water.

In other regions of Mexico, people add their own special seasoning to this dish, such as condensed milk, garlic, chicken broth, Coke, orange juice, and/or beer. Not only do these ingredients give the carnitas their distinctive golden-brownish color, but they also help tenderize the meat. However, if you follow a simple traditional recipe of rendering down the meat until all the liquid evaporates, you’ll still have golden brown pieces of meat.

IN THIS RECIPE
I wanted layers of subtle flavor so blended into the water some onion, garlic, cumin, and oregano. I’ve had some carnitas made with condensed milk and have always enjoyed the understated sweetness. This time I added not only a few spoonfuls of the condensed milk, but also freshly squeezed orange juice. I have skipped the process of cooking the pork in lard, instead opting to allow the pork to cook in its own fat juices.

The trick here is once you’ve finished braising the meat and the liquid has dissipated, place them in a hot oven (450 degrees) and allow them to crisp up nicely. Trust me when I say this is NOT a difficult dish to cook. It’s actually a lot of fun. Give yourself a good three hours to do it right. ENJOY! 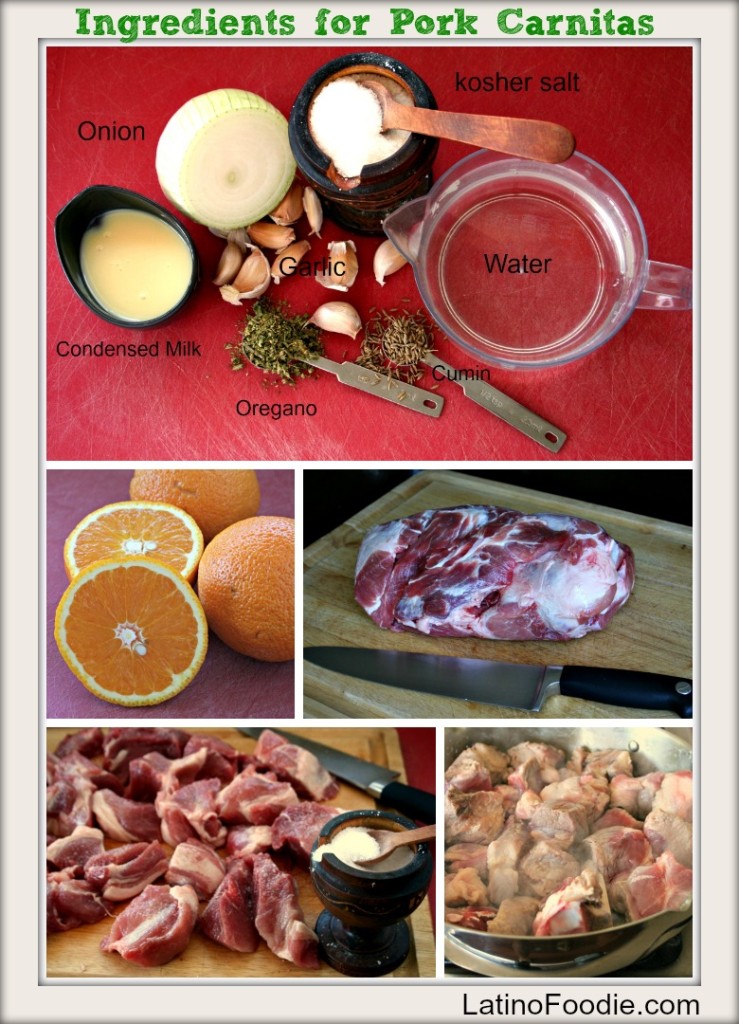 DIRECTIONS
1. Remove the pork roast meat from the bone and trim some of the fat, but leaving enough on to render down and flavor the meat. Cut the roast into 2-3 inch chunks.
2. Season the meat generously on all sides with kosher salt.
3. In a blender, add the onion, garlic, water, oregano, and cumin. Puree.
4. In an extra-large and deep skillet or stock pot, add the oil and heat on medium-high. Add the pork. Cook each side for about 3 minutes.
5. Add the water liquid. Pour over the condensed milk and orange juice. Stir the pork until all the chunks are coated. Do not worry if the liquid does not cover the meat.
6. Reduce the heat to medium-low and slow cook the pork for about an hour until all the liquid evaporates.
7. While the pork is cooking on the stove top, pre-heat the oven to 450 degrees.
8. Once the liquid has evaporated from the skillet, move the pork to a roasting pan. In an oven, roast the pork for about 20 minutes, turning the chunks of meat every 5 minutes so all sides get nicely brown and crunchy. 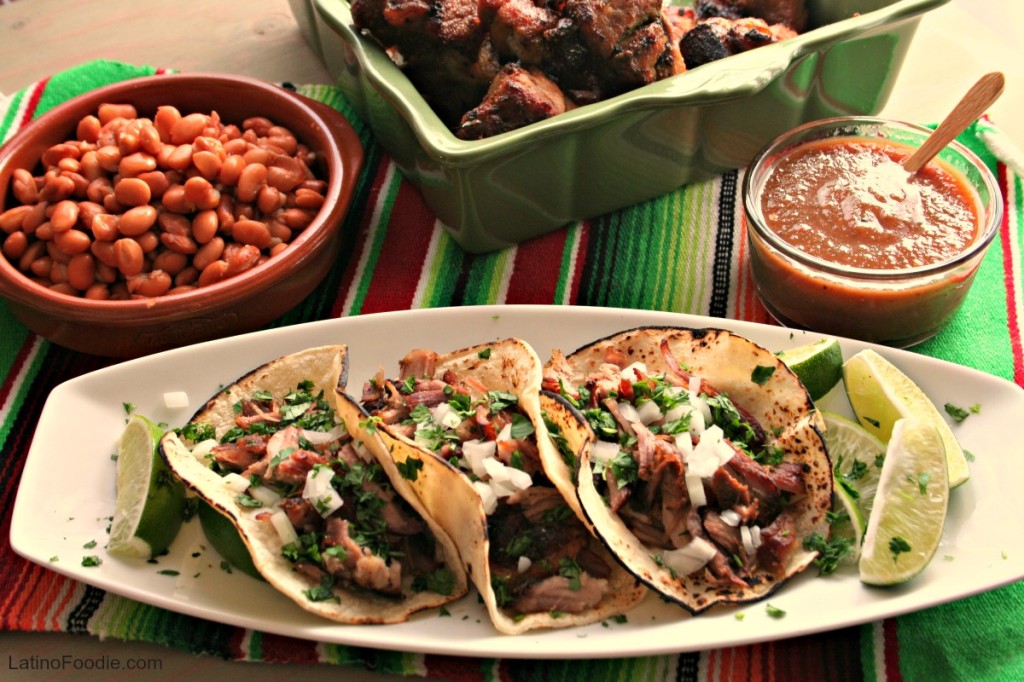 @thekitchn When making Roberta's Pizza Dough, what is the purpose of letting the dough rest for 15 minutes between kneading? https://t.co/oIyEjyaJ7r
View on Twitter
0
0
Visit LatinoFoodie's profile on Pinterest.