Saturday was a bright day in Long Beach (a bit too bright if you ask me) for these two LatinoFoodies, who just spent the night before in LA gorging ourselves with gourmet Mexican food and imbibing in way too many wine tastings. Yet we put on big boy shorts, you know, the expandable kind, swallowed anti-acid, and trekked off to the Long Beach Street Food Festival near Shoreline Village. At the end of the day, we’re glad we did. You have to check it out next year.

First up – The Grilled Cheese Truck. Probably the more popular truck of the festival as people stood in line for more than 20 minutes in the hot sun no less to get a taste. 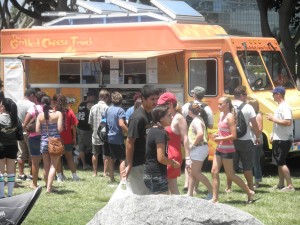 It was too long of a wait for us (remember, we were a bit crudo) so we opted for a BLT from the Lardon Truck. It appeared everything is cooked in bacon fat at this truck. Yum! They’re a friendly bunch, too. The sandwich had Nueske’s peppered bacon, butter lettuce and tomatoes with St. Agur blue cheese served on a toasted baguette. 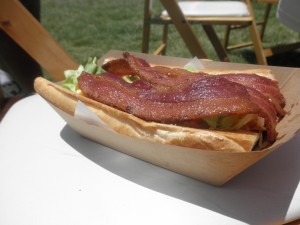 We found shade at a picnic table under a large red umbrella. We nibbled on Bacon Cheese Crisps from BaconMania Truck while sipping Alaska IPA’s feeling much better. The crisps were everything cheddar cheese should be. Picture this:  Cheddar Cheese and Chunk Bacon Blend fried to a crispy chip. Topped w/ sour cream & bacon bits. We listened and sang along to an 80s band rocking out to Soft Cell’s “Tainted Love.” Ah, the memories! It was fine until some crazy-looking loca up front by the stage started dancing by herself. HILARIOUS. We should’ve taken a video of that! Instead, here’s a picture of the bacon cheese crisp. 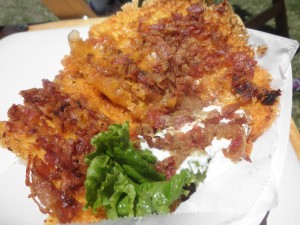 The heat of the summer and the ocean just a few hundred yards away made it a perfect day for a Tiger blood shaved ice. Honestly, we’ve never had tiger blood before. The sweet syrup is a mix between strawberry and cherry. Unfortunately, for one of us, the beet red liquid attacked his cotton white shirt. Lesson learned readers. Do NOT wear white at a food festival. 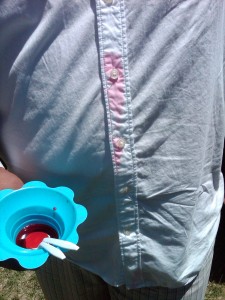 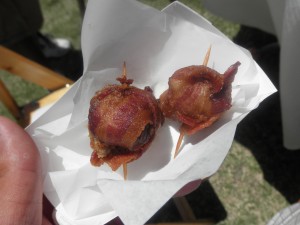 Naturally, the favorite part of the day was dessert. We devoured a Le Classique crepe from the Crepes Bonaparte Truck filled with Nutella, fresh strawberries and a scoop of vanilla ice cream. 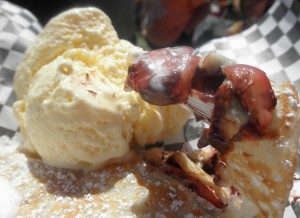 But, one dessert wasn’t enough, we had to sample more! Next up were Vintage Longboards Ice cream bars dipped with chocolate, one rolled in salty pretzels pieces and the other rolled with Oreo cookies. 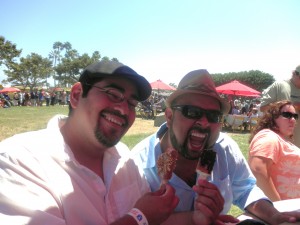 By the end of the day, these two LatinoFoodies quite frankly rolled out of the park, our pansas full, but of course, somehow, someway, we still found room for strawberry and lemon cake balls from the Sweets Truck. 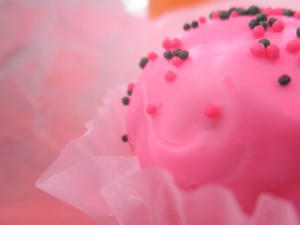