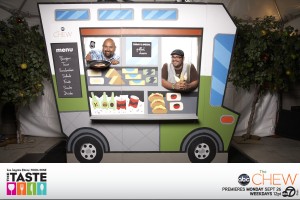 LatinoFoodie Nation, I’ll confess that day two of the Los Angeles Times’ The Taste nearly broke me.  The night was called Taco Tequila Tryst. Tacos as far as the eye could see!

The night started off with a bang: Loteria Grill served up some ridiculously tasty Tacos Veracruz.  Red Snapper tacos in a tomato, caper, and olive sauce with black refried beans and sweet plantains are a great way to begin any food festival. 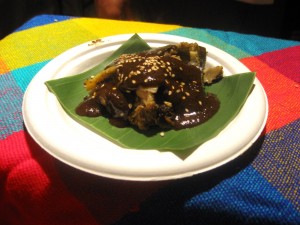 Just a few tacos into The Taste and I needed a taco break.  I found it at Guelaguetza in their black mole and chicken breast tamale wrapped in banana leaf.  Unfortunately I had a five alarm fire in my mouth from a Habanero sauce that La Flor de Yucatán snuck onto a cochinita pibil taco.  After I put out the fire de la Flor I helped myself to a second tamale and let my taste buds drown in the thick, luscious sauce.  Guelaguetza has a Festival de Moles plate which is served with four of their most popular mole sauces: black, red, coloradito, and estofado, served with shredded chicken breast, rice and hand-made tortillas. 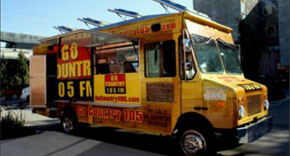 Continuing my taco conquest, a LA radio station, Go Country 105 FM, launched their food truck called The Chuck Wagon.  The truck is operated by B Sweet Catering and they had an eclectic menu with 6 different tacos from all over the world.  Notable among them were a Korean Bulgolgi (marinated beef) with a soy garlic mayo, a Filipino chicken adobo taco with pickled cucumbers, and my personal favorite, a Chinese marinated tofu taco with an Asian slaw and chili sauce.  It was a little messy, but well worth the extra napkins. 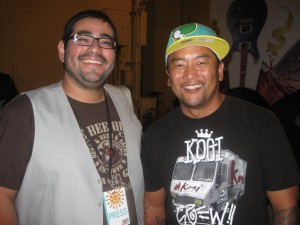 Kogi, the Original Gansta (OG) in the gourmet food truck movement, was banging out their own now famous Korean tacos.  From what I saw, they had four very long lines.  It felt like a sin to forgo Roy Choi’s tacos this time around, but with so many tacos beckoning I had to move on. 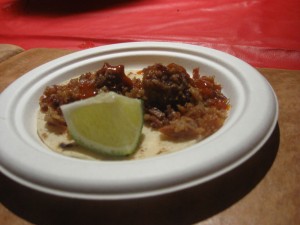 Xoia had our favorite taco of the whole night: chicken chicharron taco with homemade red salsa.  That’s it, no frills just great flavor.  Check out Xoia next time you’re in Echo Park and try their Mi Quang Pork Tacos which are paprika and shallot spiced pork tacos. 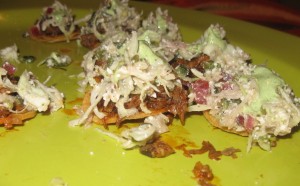 On our way out, we grabbed a few more tacos, much to my pansa’s dismay.  Border Grill had smoky adobo roasted lamb tostaditas with roasted poblano, pickled onion, cotija cheese, and poblano aioli.  Even though I was at bursting point, I quickly gobbled down two of these.  At Taberna Mexicana I had a chicken adobo taco with a tomatillo crema and onions and finally called it quits!

The only tequila I drank during my taco binge was from Hornitos.  The best wine that I had was from Table Wines and the best beer I tasted was from a little brewery in Whitefish, Montana called Black Star.  Most of my tacos were washed down with this tasty double-hopped golden lager.  I went to their “Beer Locater” on their website but was disappointed with the following message: “We are working very hard to get beer in your area. With your help and a little patience, Black Star will be in your town soon.”  I hope they update their Beer Locater soon because Stephen located some at our neighborhood (Alhambra) Albertsons.

Another first for me was a surprisingly delicious Peroni, an Italian brew.  Stephen, who gave up on the tacos early on in the evening, parked himself right in front of the Peroni area and listened to the music and people watched. I know we’re heading into fall, but this super refreshing and light beer is a great accompaniment to any backyard grilling; lucky for us Angelinos that we can grill year-round.  It was a welcomed reprieve from the endless sugary cocktails and countless cups of heavier beer and wine I drank to wash down the limitless tacos. 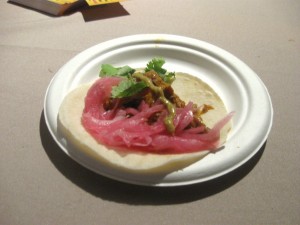 It was a night of tacos where cochinita pibil was the star, or over-represented, depending on who you ask.  It seemed like every other booth had cochinita pibil.  Perhaps that’s why my favorites where the chicharron from Xoia, red snapper from Loteria Grill, marinated tofu from the Chuck Wagon and Border Grill’s roasted lamb.  To be fair, La Sandia & La Flor de Yucatán had some of the best cochinita (pictured here)…just watch out for that Habanero sauce, unless you’d like to burn a hole in your throat.

While I didn’t taste everything, I was pretty darn close.  After all the taco tastings, I can only hope that Alka-Seltzer will have a booth next year.

The Black Mole recipe that follows is directly from the Guelaguetza website as posted by owner/chef Bricia Lopez.  The mole pastes are available for purchase online or at the restaurants for $8 per 16oz. container.  Check out their site for more delicious recipes.

Strain the tomatoes back into the pot and add Guelaguetza’s black mole paste.  Stir until the paste has fully dissolved.

Bring the mole to medium heat.  Slowly, add 2 cups of chicken broth.  Season with salt, and the Oaxacan chocolate.

Stir for another 10 minutes until the mole comes to a boil.

You are now ready to serve delicious Guelaguetza black mole!