The intimate connection between holidays and food has existed and endured throughout time in all cultures. These culinary rhythms accentuating the holidays are especially true for Spanish-speaking cultures: tamales and Christmas, the Rosca de Reyes (ring cake) and the Day of the Epiphany (commonly referred to Three Kings Day), Capirotada (bread pudding) and Lent, are just a few to keep in mind, but what about New Year’s? Besides all the party cocktails associated to this holiday, are there actual foods associated to the first day of the year? The answer, of course, is yes! Foods symbolic of prosperity and luck, such as lentils, greens, pork, and grapes are enjoyed in different cultures, including the Spanish-speaking world.

Lentils and greens, because of their round shape and color, are associated to money and consuming them is thought to bring good economic fortune for the coming year. In many countries pork and fish are associated with good fortune since in traditional, rural cultures the number of pigs and livestock was the indicator of personal wealth. Fish, because they’re constantly moving forward in schools, are the symbol of personal progress and abundance in some Asian and European cultures.

In Mexico, Colombia and many other parts of Latin America people carry on the Spanish tradition of eating grapes at midnight. The tradition, called ‘las doce uvas de la suerte’ (the twelve grapes of luck), requires that, with each chime of the bell at midnight, one grape must be eaten: the sweetness or tartness of each grape will indicate what kind of month lies ahead of you. For example, if the fourth grape is sour, the month of April may have some unwelcomed surprises for you! The tradition dates back to the late 19th century when in one particular year a group of grape farmers in Alicante, located in the eastern coast of the Spanish Mediterranean, harvested an abundance of grapes, and so needed to rid themselves of their abundant crop. In what became a clever marketing strategy, they promoted the practice of consuming grapes at midnight. Ten years later it was popularized throughout the region and today is still practiced throughout Spanish-speaking countries. 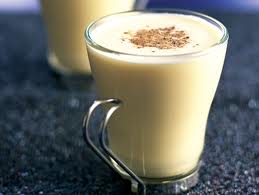 The delicious egg nog of the south, “Rompope.”

Beverages, of course, take on special meaning for the New Year. Like so many of Mexico’s culinary signature dishes, rompope (a finer version of egg nog with alcohol) was born in the kitchen of a convent. The mischievous nuns at the convent of Santa Clara in the state of Puebla mixed eggs, milk and cinnamon and added a splash of alcohol to spice up monastic life at the convent. The Puerto Rican version of this, the heavenly Coquito, also includes eggs and cinnamon, but a coconut cream (or for a lighter version of it, coconut milk) is added to the concoction. In Madrid, Spain after the parties and street celebrations, eating churros and chocolate caliente (hot chocolate) at 5 or 6 in the morning,  is a popular way of welcoming the New Year.

Wherever you may be this New Year may you be fortunate to partake in any of these culinary traditions,… and may all your grapes turn out delectably sweet for 2014!